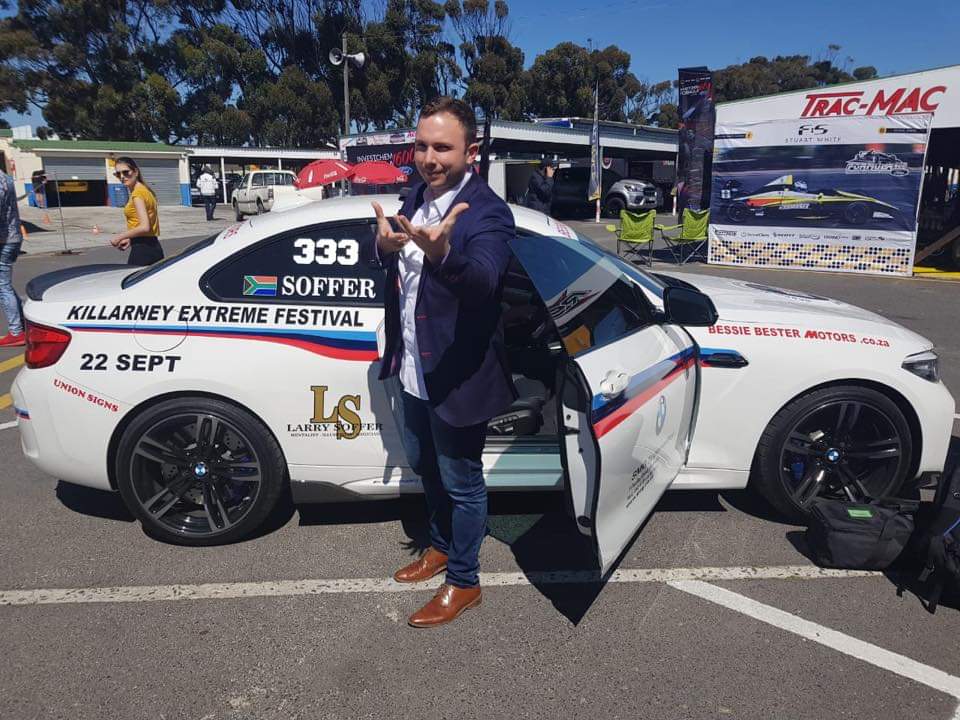 “It’s very nerve-racking guys, I am very nervous at this moment – but I trust him! I trust Larry.” These were the words of Kfm presenter Ricky Schroeder as he sat alongside Larry Soffer while he prepared for the unthinkable: driving a lap around the Killarney circuit while blindfolded!  In 1966, famous mentalist David Berglas performed a similar stunt in London, with the stuntman driving next to iconic British racing driver Graham Hill in the passenger seat. He managed to drive through a small part of London successfully – perplexing onlookers and other drivers in the process – and finished the stunt off by reversing into a parking bay.

The Extreme Festival is an annual event that takes place at Killarney International Raceway in Cape Town. The one-day festival attracts racing fans from all over the country, and it includes a seven-category programme of various cars and races, as well as food and drink stalls, and it was at this event last year that Larry completed the stunt, on the 9th of November 2017.

While readying themselves for the task at hand, Larry asked Ricky to inspect the “blindfold” – which was actually a combination of opaque, aluminium “glasses” and a black fabric bag – to put any sceptics at ease by making sure that both items allowed no visible light to pass through them. Before attempting the lap, Ricky sat in the passenger seat of the Bessie Bester Motors car wearing the blindfold to get a feel for what Larry would experience in the driver’s seat.

Before the start of the lap, Larry spoke to an interviewer about what inspired him to attempt the stunt, making reference to Project Stargate, a series of experiments carried out by the USA’s Defense Intelligence Agency (DIA) which aimed to create “super soldiers” with the ability to “see through other people’s eyes from a distance”, which he also describes as “remote viewing”. The idea behind the stunt was for Ricky to talk Larry through the lap by describing what he sees, helping him to form a mental connection with Larry in the process, which would in turn allow Larry to see through Ricky’s eyes. According to the interviewer, additional obstacles had been set up on the track to further challenge Larry.

The lap started off smoothly, with Larry following Ricky’s instructions perfectly, turning, slowing down and accelerating at his behest. He managed to navigate his way around the traffic cone obstacles that had been set up at random points on the track, in spite of the fact that he found it hard to breathe through the black fabric bag over his head, and after a few minutes in the car he began to accelerate more and more with every passing minute. The sudden increase in speed caused Ricky some understandable panic, with him frantically calling out instructions, but Larry simply said, “don’t say anything. Let me try and do this… just try and trust me”.

There's no denying that the audience really got more than they bargained for. As the lap came to an end, the two men let out sighs of relief with a few nervous laughs here and there, and Larry finally removed the stifling blindfold. Larry pulled off the stunt in style, exceeding speeds of 120 km/h and stunning the crowd in the process, leaving them with a truly extreme memory from the 2018 Extreme Festival.